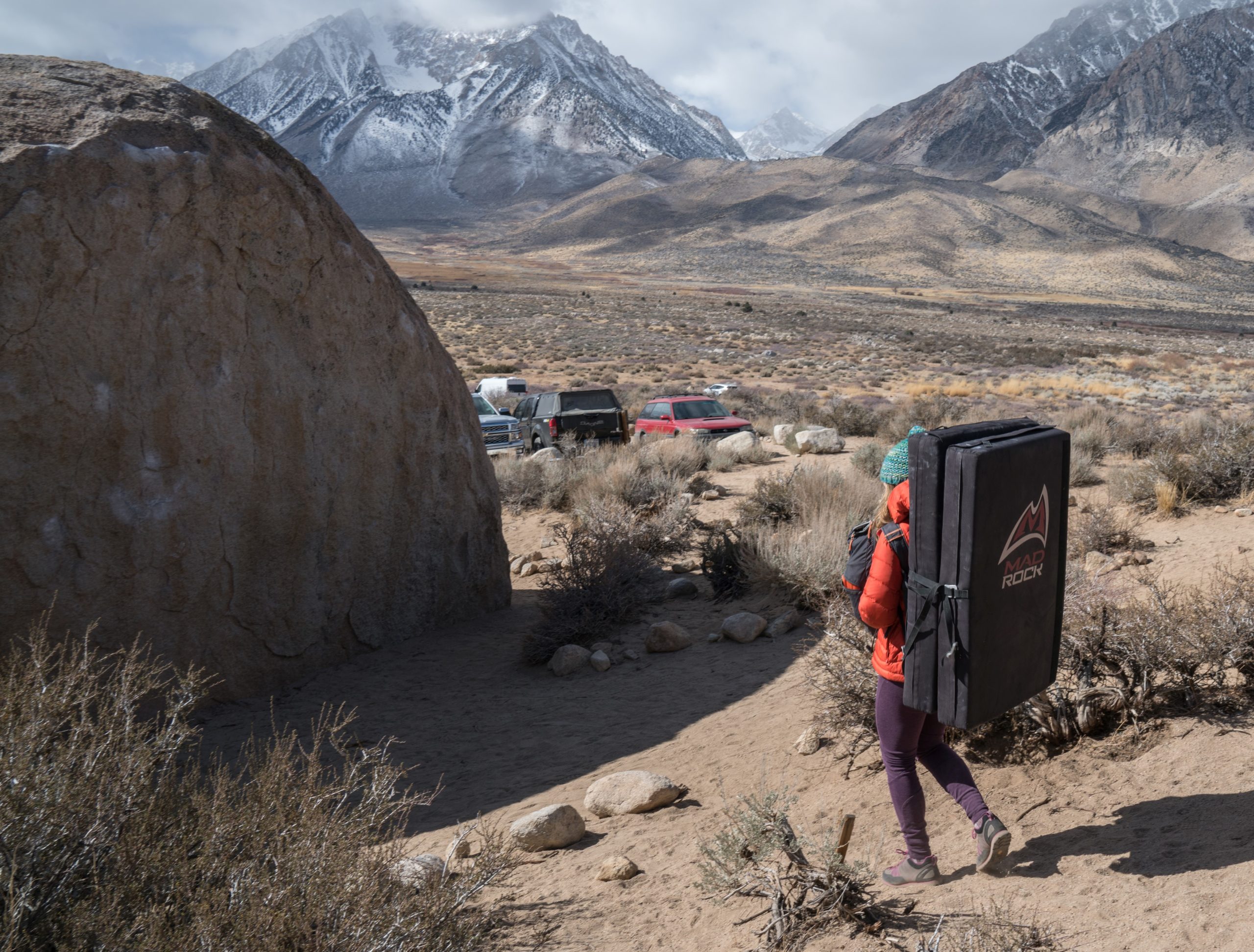 When you first head to a bouldering gym or area, you will often hear the term ‘boulder problem’. Don’t be alarmed, you are perfectly safe! There is no danger. All it means is that you have stumbled upon a bouldering route.

Let’s get down to the nitty-gritty, what is a boulder problem? Simply put, it is a sequence of moves that lead to to a defined top. It is climbed without a rope or any other kind of safety gear and is likely around 3.5-5 metres high. In the gym, most problems have defined holds which mark the top. When you go outside, you usually have to ‘top out’ a problem, which means climbing over the top.

Why Are They Called Routes in Climbing, but Problems in Bouldering?

It is mostly down to semantics. In essence, a climbing route is a longer climb requiring protection, such as a harness and rope. As a result, a problem is a smaller climb. Even so, there is some crossover here, especially when it comes to highball bouldering.

Nevertheless, boulder problems tend to have around 6-12 moves per problem. Most will have a hard part called the ‘crux’, but it is better when the whole problem has challenging sections. Indoors, many problems have a specific way they have been set. However, not everyone will climb them the same.

This depends largely on technique, size, and strength. Shorter people will have to move in different ways, and stronger people can often power through certain sections. This means that figuring out a problem is often a personal challenge.

What Does a Boulder Problem Mean in Relation to Climbing?

Some climbing routes will have a section with a ‘boulder problem’ in it. This means that at a certain point the climb will require more strength and dynamic movements that resemble typical boulder problems.

It is a more intensive part of the climb, which probably has only one sequence of moves that can send it. It is usually a short section of the climb and afterwards, the route will get immediately easier.

What Kinds of Boulder Problems Are There?

One of the main benefits of bouldering is using your brain to solve problems. This is because there are many different types of routes to try and conquer and it makes the process much more enjoyable.

Bouldering problems are categorised in different ways. There is no definitive list, however, it is useful to do this as it is easier to compare problems at a later stage. Therefore, we have broken down so categories for you below.

The old enemy for many. Vertical walls with slight angles facing away from you are what define slabs. Furthermore, the holds are tiny and the moves technical. Even many experienced climbers do not like this type of climbing. There is no way to power through these, instead, you need to know how to generate force through your feet.

Core strength is what defines an overhang or roof problem. An overhang is a wall angled towards you, whereas a roof makes a problem horizontal to the floor! Both require technique, core, and finger strength. This means that it is not recommended for beginners. As time passes, you will eventually find yourself in the ‘caves’, as they are called.

A highball boulder is for the crazy ones. Anything above 5 metres is going into highball territory. Once you get above 10 metres you are into free soloing and that is a very specialised area.

A highball, which is only found outside, should only be attempted by top-level climbers who are confident in their ability. The risk is higher and you definitely need mental fortitude.

Indoors, an arete means the corner of a wall. A problem can be set where it must be solved using this. Therefore, different techniques are required and it can be quite challenging for a new climber.

Volume only problems are essentially that. In the bouldering gym, you may have noticed triangle-shaped things sticking out of the wall. These are known as volumes. Sometimes, route setters (as they are weirdly known – not ‘problem setters’, don’t ask why!) will set a problem made entirely out of volumes. Meaning no normal holds allowed! It a fun, yet challenging task.

Most bouldering gyms have a comp wall. This is essentially a mimic of boulder routes found at events such as the International Federations of Sport Climbing’s Boulder World Cup. An empty wall with around four problems is a good signal as to which is the comp wall. They are more technical in nature and are for the more experienced boulderer.

Overall a Boulder Problem Is Easy to Define

As you can see, defining what a boulder problem is has been a pretty easy task. Bouldering is essentially climbing a defined sequence of moves to a top point. Using certain lingo is what boulderers like to do, and it is no different here. Give it time and you will know all the ins and outs too!

Any cookies that may not be particularly necessary for the website to function and is used specifically to collect user personal data via analytics, ads, other embedded contents are termed as non-necessary cookies. It is mandatory to procure user consent prior to running these cookies on your website.