Both new and seasoned climbers struggle with grading systems that is why we have come together to create the ultimate bouldering grades guide and comparison review.

How do boulder grades work? How are boulder problems graded? What is the difference between V Grades and Font Grades? These are all questions we will answer in the following article.

What are Bouldering Grades?

If you are new to bouldering, you will probably ask the question of what does the grading system actually mean? Essentially, they are a combination of numbers and letters that tell you how difficult a certain problem is.

They are used both indoors and outdoors, so no matter where you climb you will come into contact with them. The two main bouldering grading or bouldering rating systems are V Grades or the Font system.

Obviously, these are not the only ones, but this is what most professional boulderers and climbers refer to.

Some bouldering gyms will actually develop their own grading system depending on the place. This will most likely involve coloured tape and only have four to six levels of grading. With boulder problems increasing in difficulty depending on their colour.

Who Decides How to Grade Boulder Problems and Why? 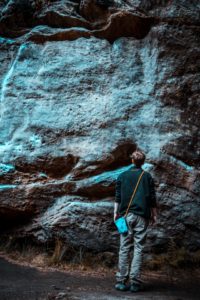 The reasons for grading bouldering problems is pretty clear. They indicate to the boulderer how difficult the problem is. At the lower end of the scale, this is to show newbies which routes they should expect to complete.

At the higher end, it shows the top athletes what problems are the most challenging and can really help innovation within the sport. Grading problems can also give certain climbing areas and boulder areas an easy comparison with others. Really, they are just a guide to help boulderers see where they can climb and the level they are at.

Deciding how problems are graded is fairly subjective. It is not uncommon that some problems will be graded one way and someone comes along and changes the grade. Furthermore, the main component of grading a boulder problem comes from how challenging it is in a physical sense.

The style of climb could suit one climber over another, or the problem could be mentally challenging, a high-ball or more. This generally does not play much of a factor in deciding which grade is assigned.

Problems that are freed and are outside will be assigned a grade by the person who has the first ascent. This may then be changed by the next few people who climb, but in general, there will not be much variance.

There is no official channel to communicate which problem has which grade, and you will often have to rely on local guides or word of mouth.

Naturally, some areas will be well-covered and have a bigger reputation than others. Therefore, knowing the routes and grades will be easy to find. In other places, not so much.

Every climbing and bouldering gym will have a so-called “route setter”. There are often multiple different people employed in this position. These will be the people in charge of setting a problem and ultimately grading a route.

These setters are usually very experienced and put up routes according to what they think a certain grade is. Some will also get other climbers of a certain level to test the problem to see if it stands up to their grade.

Once again this is a subjective process and there are no defined rules to determine a grade. Usually, it is simply one person’s opinion on the matter.

This is the main reason why there are often discussions taking place disagreeing on certain grade, that one route is too hard and another is too easy.

The Most Common Bouldering Grading Scales in the World

Depending on where you are in the world, you will have some knowledge of a certain grading system. As the sport of bouldering is and was a grassroots movement, there has never been some unified system that can be translated worldwide.

Even so, throughout the years’ certain numbers of systems have won people over and are the most popular. 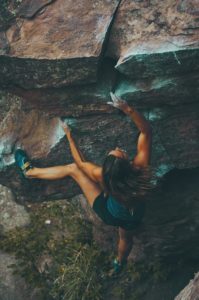 The Fontainebleau Scale, or the ‘Font Scale’ is the most common grading system used in Europe. Starting around 1960, it is an open-ended scaling system that starts at 1A and goes all the way to 9A (at the moment).

Instead of just increasing numerically, there are letter and symbols which also indicate difficulty. For example, a 7A+ is harder than a 7A, but not as difficult as a 7B.

The system also incorporates a colour system with orange, blue, red, black, white and purple all tied into to difficulty levels.

The “V” scale is one of the most popular systems in the world. It was developed by John ‘Vermin’ Sherman at Hueco Tanks State Historic Site. This was in the 1990s and spread throughout the US and North America.

Much like the Font system, it is an open scaling system using mostly numbers. The easiest start at VB (beginner) and V0. The hardest problems currently are V16 and V17.

Of course, between grades, there is some variance. For example, some V6s are easier than others. Here some people have added the +/- signs to try and distinguish, but this is not particularly popular.

The Dankyu system is widely used by Japanese boulderers. When using bouldering grades, it really is only used in this country.

It has been adapted from martial arts, and 1 kyuu is seen as the baseline for boulderers – equivalent to V5/6. Before this, the kyuu grades goes up to 10, and represents easier climbs. 2 kyuu is a V4, and 7 kyuu is a V0 for example.

After kyuu, comes dan. This is for advanced climbers and the dan number ascend in relation to how hard a climb is. 1 dan is a V7/8, 2 dan V8/9 etc.

The system is very rarely used outside of Japan.

Now let us see how bouldering grades compare. In the table below we have created a direct comparison for you to use. At the lower levels, there is much crossover between grades and makes it more difficult to translate, but the higher the grade is the easier it is to compare.
Check out the table below!

If you are looking at this and thinking what does it all mean, don’t worry, we have you covered! The bouldering grades can be broken down into the following categories (using the V scale):

At this stage, you have most likely only been bouldering for a few months. Progress between grades is relatively quick as basic technique is easy to implement. Holds are usually big, and the problems are easy to read.

The problems in this grade range are starting to require good finger strength and technique. Progression is still pretty quick at this level and V4 is attainable fairly quickly with regular training.

Starting to hit the upper graded problems in the gym. You will only attain this level after a few years of bouldering at least. Progression between grades is painstakingly slow at this level.

Many of you will dream of being an expert. Only the top climbers in the bouldering hall are at this level. It requires strict training and dedication to get to this level. Lots of outside climbing is also needed.

Only the best boulderers are at this level. They are most likely professionals and have sponsorships. For many of us, watching a Reel Rock film is the closest we’ll come to climbing this.

Conclusion: No Universal System – Climb for Yourself

When it comes down to it, there is no universal system that dictates bouldering grades. We have seen that there are two or three favoured ones around the world, yet there isn’t one definitive one that unites the bouldering community.

What’s more, some boulderers simply do not agree with grading at all saying that it is sucking the soul out of the sport. The more you focus on a grade, the more you lose sight of the ultimate aim of bouldering which is enjoyment.

Of course, grading gives you the chance to see improvements and compare with others. So all is not lost! We recommend using it for guidance, but don’t get hooked on chasing the next level.

Find more about bouldering throughout our site and enjoy yourself doing it!

Now we have come to the end of our page dedicated to bouldering grades we have decided to provide you with some of the most frequently asked questions our readers have.

🏅 What is a good bouldering grade?

🧗🏾 What does the ‘V’ stand for in bouldering grades?

The V stands for Vermin, this is a nod to John ‘Vermin’ Sherman who developed the system in the 1990s in North America, more specifically at the Hueco Tanks State Historic Site. So basically, it is just a name!

💪 What is the hardest bouldering grade?

The hardest grade currently is the V17 (9a), this is the top end of the sport and it is very rarely achieved. It must be noted, this is an open-ended scale, so there could be harder grades in the future!

It is hard to compare! Even so, as we are boulderers, we would lean towards saying, “yes”. However, that would be disingenuous of us. They are both graded accordingly, and both require training and hard work to progress.